-Elizabeth Bear at Ideomancer (which, BTW, has an awesome new look):

In Servant of the Underworld, Aliette de Bodard has created a rather good debut novel, replete with magic, blood, and complex worldbuilding. There was a great deal to enjoy in this book, not all of it the immediately obvious.

(…)for those who enjoy mythology, subtle horror, and even “detective” stories, Servant of the Underworld blends these elements into a unique story. Fortunately, it’s labeled the first book in the Obsidian and Blood series, so hopefully we’ll be seeing Bodard’s next release soon. Looks like book 2 is called Harbinger of the Storm. Sounds…peaceful.

-And Hereward L.M. Proops at Booksquawk (who didn’t like it so much, alas, but you can’t win every time):

(…)those looking for something truly different could do much worse than check out this novel. Whilst not perfect, Aliette de Bodard’s debut shows a great deal of potential which could be better realised in the inevitable sequels.

-The book also gets mentioned over at SF Signal as part of the “What Book Have You Recently Read That’s Good Enough To Recommend To a Friend?” discussion.

-Still at SF Signal, my short story “Golden Lilies” is identified as one of several “Nebula-worthy” short stories by Eugie Foster

-Finally, BestSF reviews “The Wind-Blown Man”, in the February 2010 issue of Asimov’s

Aliette de Bodard looks to China to create an alien society, alien cultures and technology – a world in which China is on a par, or better, with Western Christian society. For my money, I’d rather see Earth cultures used as inspiration to create truly alien societies, as that is true SF – but failing this, I’d much rather see the creative efforts as put in by de Bodard. 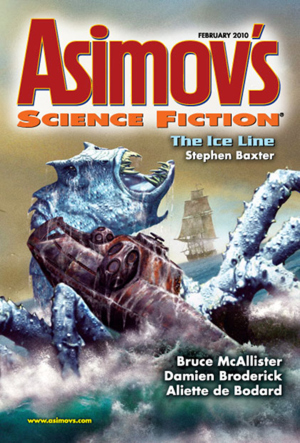 -My novelette “The Wind-Blown Man” (aka the Daoists in space story) is now available in the current issue of Asimov’s (along with “The Stone Wall Truth” by fellow Codexian and writer extraordinaire Caroline Yoachim, which has a tantalising snippet up on the website). And, er, I would appear to be on the cover, right there with the famous people…

On a clear day, you could almost see all the way into Heaven.

That was what Shinxie loved about White Horse Monastery: not the high, lacquered buildings scattered across the mountain’s face like the fingerprints of some huge Celestial; not the wide courtyards where students sat like statues, the metal of their second-skins gleaming in the sun; but the clear, crisp air of the heights, and the breathless quiet just before dawn, when she could see a flash of light overhead and imagine it to be the reflection of Penlai Station.

In those moments, she could almost imagine herself to be free.

Quite curious to see the reaction to this one, as it was a bit of a challenge: it’s got a completely different scientific history of the world, a weird melding of science and religion, and it’s entirely told from the point of view of insiders to the culture (unlike “The Lost Xuyan Bride”, where having a European as the viewpoint character made a number of things easier to deal with exposition-wise).

-Apex is organising a Story of the Year Award. Up for consideration is my Chinese post-apocalyptic story “After the Fire”, but there is a lot of fine stuff on display. My personal favourites were Peter M. Ball’s “To Dream of Stars: An Astronomer’s Lament” and Rochita Loenen-Ruiz’s “59 Beads”. Both horrific in quite different ways. But go ahead, read and vote :=)

Doug Cohen has posted the TOC for the February 2010 issue of Realms of Fantasy, which will contain my story “Melanie” and associated artwork by Frank Wu (you can see the cover here, which is also the interior illustration for Ann Leckie’s “The Unknown God”). I would seem sharing a TOC with Harlan Ellison.

And, over at the Asimov’s website, the next issue announces “The Wind-Blown Man” as “a debut […] sure to turn heads” (along with a story by Codexian Caroline M. Yoachim).

Finally, Rich Horton mentions me, albeit very briefly, in his year-end summary of Interzone (for “Ys”).