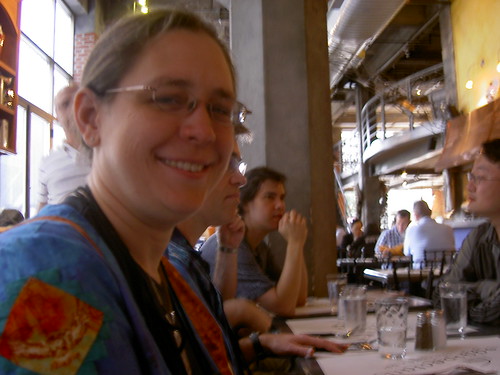 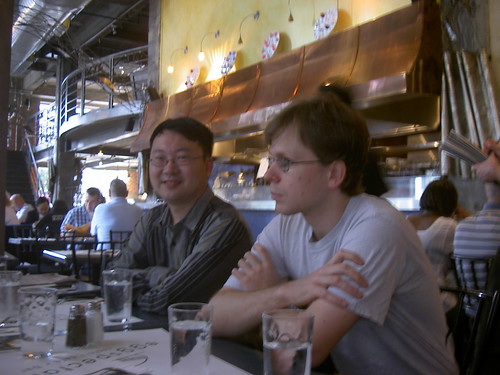 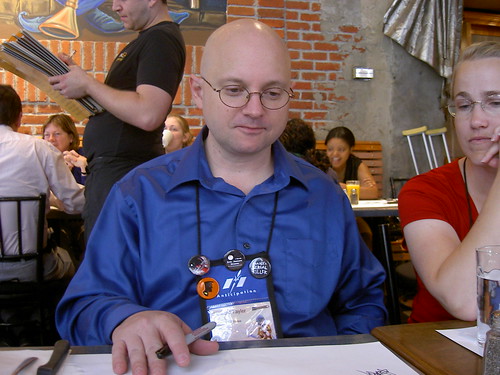 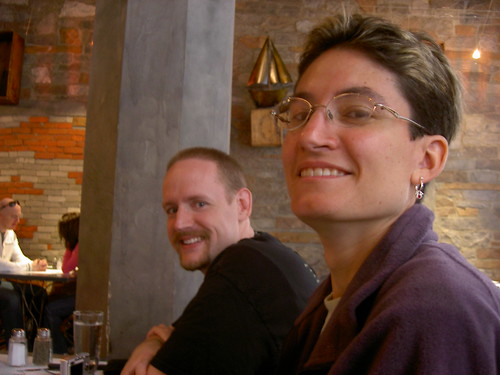 Traci Morganfield, Eric James Stone
The food was, er, extreme–especially in quantities (I still have trouble getting used to the servings in North America). But it was very nice to talk with everyone, and to finally put faces on names.

I had my signing in the morning–which, as expected, wasn’t the most crowded place around. Thankfully, the supporting posse included T.L. Morganfield, Chris Kastensmidt (whose red-eye from Brazil had arrived in the morning), Elizabeth Bear (complete with life-saving jug of water), and Tony Pi. 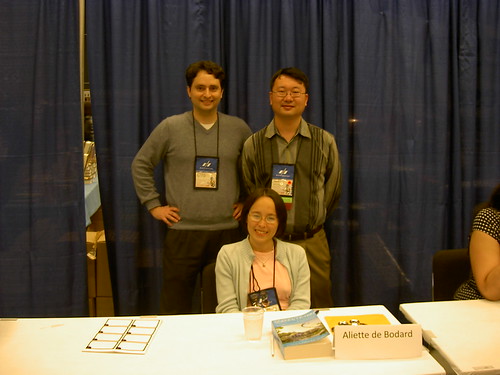 Me, Tony and Chris (picture taken by Traci)

We headed out with Chris and Traci to get some lunch, and catch up on news (for someone who hadn’t slept a lot on the trip in, Chris was remarkably alert. Clearly, having a six-month-old in the house increases your resistance).

Then I plunged into my first French panel, on colonial/post-colonial SF. Ah, well. As I was soon to discover, most French panels were under-attended, and it was a miracle to have one in which the panelists didn’t outnumber the audience. (it makes sense, when you think about it. Most French people who’ve made the trip to a Worldcon can understand English, and would rather check out the English authors they don’t have a chance to hear at their local cons; and the same goes for French Canadians). But still, it was pretty dismal to be 4 panelists and one translator to 3 members of the audience…

Still, we did have a pretty interesting discussion, so all wasn’t lost. But it didn’t bode well for my other two French panels…

In the evening, we accompanied Traci to the Sidewise Awards, for which her short story “Night Bird Soaring” was a finalist. Sadly, she didn’t win, but I’m sure it’s only a matter of time until she does (her One World stories are all neat alt-hist, and I’m glad they got some recognition this way).

Party time: the Angry Robot launch party had already started by the time we dropped in, but it looked like tremendous fun (and it did have Jetse de Vries as organiser, which insured the quality of the stuff to drink). They also had one of the coolest things ever: a real, bona fide robot who served as a doorkeeper. 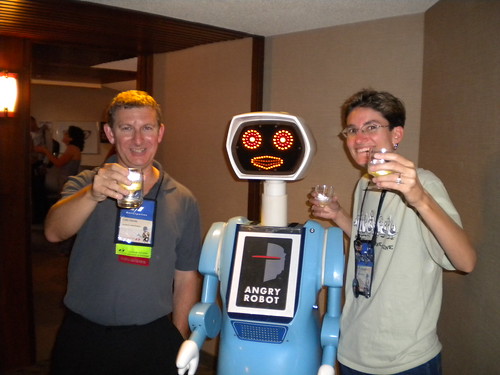 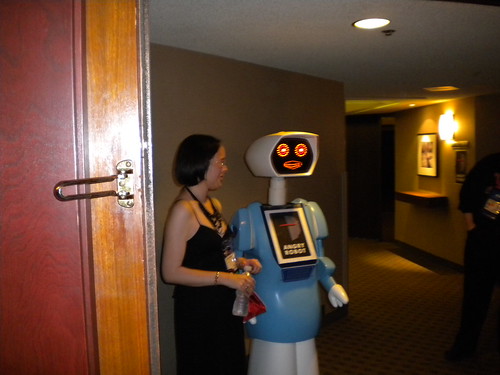 The robot hitting on me

(Matthieu and I spent a lot of time trying to work out how they were operating the robot. You know how it goes: give a bone to two engineers…)

There was champagne (and some non-alcoholic beverages for the teatotalers like me), lots of nifty books aligned on the tables, and I had a lovely time meeting fellow AR authors Lauren Beukes and Kaaron Warren (as well as chatting with AR crew Lee Harris and Marc Gascoigne).

Unfortunately, Friday was the day on which all the neat parties were aligned, so we had to leave in order to pop into Bragelonne Party (for the unfamiliar, Bragelonne is one of the biggest genre publishers in France). It had by far the best food of the whole parties (trust the French for that 🙂 ), and lots of lovely artwork from their novels on the walls.

Party #3 was the Asimov’s/Analog dessert, which was held in the SFWA suite, and which had an impressive crowd of pros in attendance. I finally found Jay Lake and got my Campbell nominee pin: 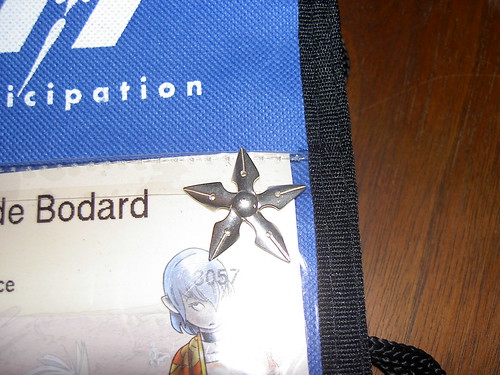 My nifty Campbell nominee pin, in the shape of a propeller (on to great things!).

It would have been a great party–save that we’d been there less than 30 minutes when we got busted by hotel security: apparently, we were having a party that was not on the designated floor (“party”, in this case, meant more than 5 people, a rather extreme view on things), and we were going to be forcibly evacuated…
Confusion ensured as they stuffed people into lifts, trying to get everyone to the 28th floor (official party floors were the 5th and 28th).
We’d had enough of crowds by then (and my brain was starting to fry), and decided to pop into the bar for a while. As the lifts were completely clogged, it turned out that we were stuck in the bar for a while… (there have been far worse fates. We had lots of drinks).
We sat with the Viable Paradise crowd, courtesy of Chris (and saw Cory Doctorow and John Scalzi arm wrestle it out for the Hugo. Cory won).
[it later turned out that local TV had run a feature on the con, and had ended it with something that basically went “there’s Neil Gaiman, and parties with free booze in the Delta”–apparently started a mass migration of interested people to the hotel, which understandably panicked…]

And then it was time for bed. Which was actually far easier than going to a party: the hotel had started to form a queue for the party floors, which was stretching into the lobby and generally looking very discouraging.