So, Villa Diodati turned five this year, and we had our tenth workshop in Southern England, courtesy of Stephen Gaskell. Wow. It doesn’t certainly feel like five years, but it’s been an awesome set of meeting points–like Ruth said, in many ways we’ve become each other’s support network and writerly family. 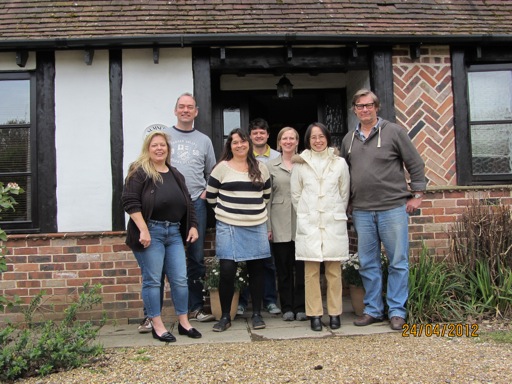 As usual, I’d taken an early train, though I hadn’t realised that I’d have to get up at 5:00am in order to catch it (prompting the new “zombie shuffle” twitter status–it turned out Steve and a couple other people had also got an early start). I arrived very early in Brighton, which means Steve and I had a chance to catch up in a bar by the beach (which was awesome. Bit colder than Brittany, but sand and sea and seagulls? Brings me right back to my childhood). Then we picked up Floris, and headed to the house to wait for the others–who trickled in throughout the afternoon.

I had, er, enthusiastically volunteered for cooking the Friday night; and discovered, not so enthusiastically, that the house had no cooking equipment. By which I meant, no spatulas, and no decent saucepans or frying pans that could conceivably be used for 7 people. I had to improvise quite a bit–thank God Floris was there to calm my panic attacks. My new resolution, by the way, is that next time I travel to a VD and propose to cook, I’ll pack chopsticks in my bag.
Still, it mostly went well, and the banana coconut pudding had its usual striking success (even though I screwed up the coconut cream preparation by misreading the packet Steve had bought for me).
Other stuff we ate at VD included Nancy’s homemade pizza, yum, Sylvia’s chocolate caramel cookies, and Steve’s lasagna with cheese, spinach and pine seeds (mmmmmmm, creaminess). As mentioned before, it’s a cooking and writing workshop!

The house was very nice, located by a fishing pond (which had plenty of geese), and with plenty of walks available a short distance from the house. That it was also quite near Gatwick was a definite plus.

Like Ruth says, this was easily the most productive VD we had: in addition to the crit circles in the morning, we had work sessions in the afternoon, where we’d tell our goal for the 2 hours, and come back and report on what we’d done. I managed to return almost all my OWW crits of “The Two Sisters in Exile”, and edit the draft for submission. And edit my outline for the urban fantasy. Phew.

We also had the submission party, which was awesome–we sat around a table and sent things out (I didn’t have much to send out, so I stuck to a query for something), a total of thirty queries and subs were sent out, and we got our first acceptance before the workshop was over!

I headed back on the Tuesday afternoon, spent some time at the airport with Nancy where we talked ebook covers and marketing, and then got my train back to London and my Eurostar (and 500g of cheddar. Yes, I bring back souvenirs from abroad. Grand family tradition: food is the best kind of souvenir, because it gets eaten and doesn’t clutter the house).

As usual when coming back from a VD, I then had the zombie shuffle, accompanied by a desperate need to sleep, because I had a wedding on the following weekend. Not much productivity; though I did set a world record by selling “Immersion” a scant few weeks after the workshop was over!

That’s all from me. Happy five years, Villa Diodati–you’ve been awesome so far, and I have no doubt there’s more in store.